The equities market has been kind – very kind – for over a year.  Stock trading gurus are everywhere.  The 10 year treasury yield has relaxed and stock prices continue to drive to all time highs.  Everything is beautiful. Am I right!?  There is so much liquidity in the market that we’re even creating new instruments to drop cash into like NFTs and SPACs.  It’s all moving together – Bitcoin, stocks, SPACs, NFTs… it seems everyone wants to participate in the free money, investment bonanza… FOMO!  However (yes, however), there are concerning underlying currents and I’m going to make some adjustments to my portfolio accordingly.

The first market warning sign – SPACs, for the most part, are off their highs even with the semi-bounce back over the last two weeks.  What does this tell me?  No one has diamond hands and SPACs will be one of the first areas to take a beating when the market weakens.

Inflation is coming and it’s going to be significant.  Hell, we’re already seeing it and last week’s PPI number is just the beginning.  The warning signs are everywhere. The question is not if, but when will Powell make his move.  Will he be forced to act (raise rates) before he hits his employment targets?  Will the economy feel the inflation and force his hand?  It’s hard to say, but if it happens in 2021, it will roll the equities market.  As the odds increase that the rates will go up, the closer we are to a market top.  It’s a fun balancing act between economic growth and when that growth is too much. We’re not there yet, but give it a few months and things could get interesting.

In the near term, the equities market is technically overbought (SPY) and it feels a lot like euphoria or a blow-off top before the money moves to safety.  It’ll be worth watching to see if consumer savings rates start moving down (they did in February) into the summer as retail investors start taking profits and using all their extra cash for trips to DISney World.

As the market runs up into earnings, it’s hard to imagine anything companies could say that would surprise to the upside.  The numbers are going to be goods with obviously strong YOY numbers, but is that not already baked in?  I think yes.  Also, I can’t wrap my head around why SPY is ~20% higher than it was before the pandemic. Looking back, the market was considered very strong at that time, so we’re 20% better now?  No, but we have tons of cash and pent up demand.  We’re paying up on the assumption that all the money consumers have been sitting on will make its way into the profits of corporations.  It’s very possible, but I’m not convinced this will outweigh the negative fallout from inflation and rising rates.

So what’s my move?

With the market overbought,  I won’t be eager to add positions this week unless there is a truly compelling story.   The SPY chart below emphasizes the overbought bias.  It’s not represented too strongly in the RSI, but check out the bollinger bands. SPY usually trades within the outer boundaries of the bollinger bands and rarely spends more than a day, or two, outside.   Ideally, we’ll pullback inside the bands and look for a new support level to bounce from.  That’s where I’ll likely look to add more. 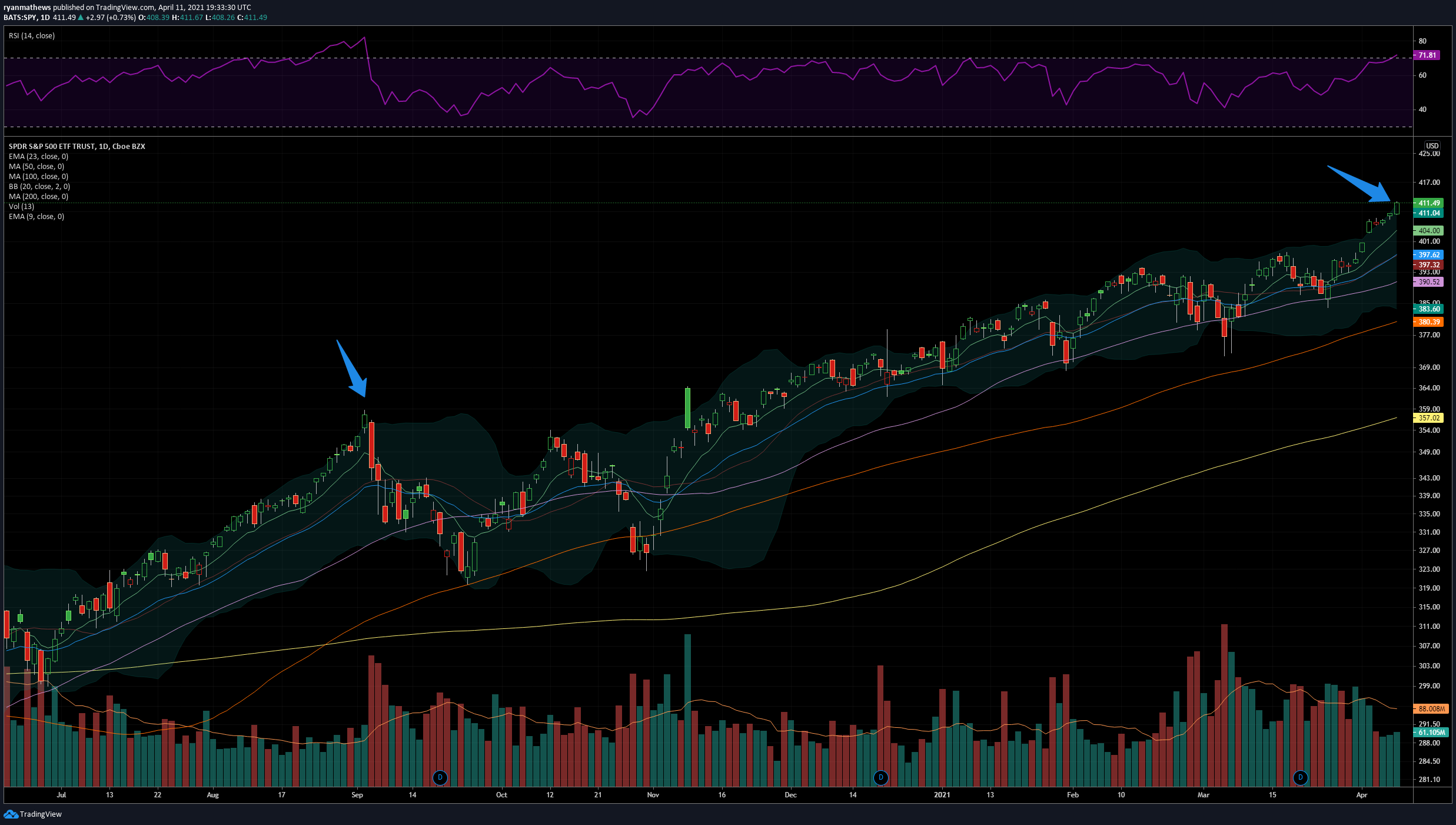 My other focus this week will be to sell some of my weaker, lower conviction positions and focus more on quality.  This will likely be an ongoing theme over the next few months.  I’m not ready to go heavy cash as the market is still in a bull market.  The worst thing you can do is attempt to predict a fall and position out off the current trend.  However, we know inflation is coming and we know government spending will slow after the infrastructure bill.  These factors will likely take the wind out of the equities market and quality will win over speculation.  Last year was the year for big speculation. This year, my focus is on being in the right sectors for an inflationary environment.

The post Slimming Down appeared first on Day Job Trader.